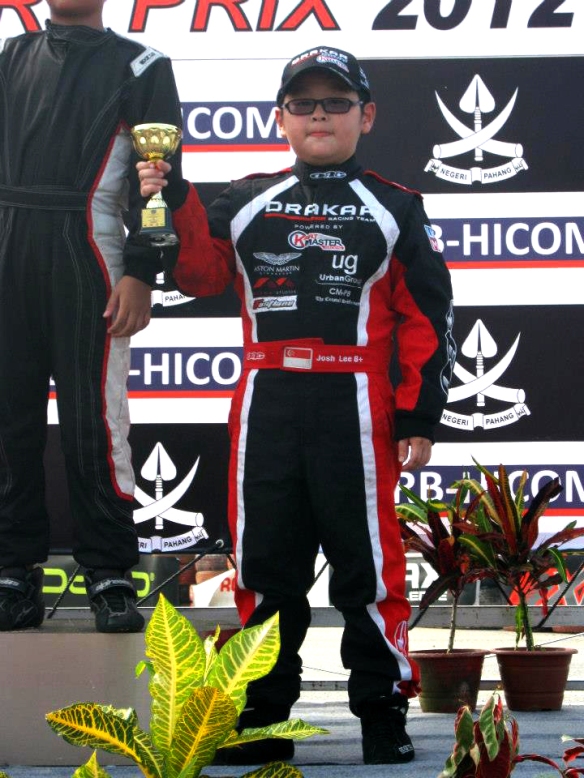 For Kartmaster Drakar Racing Team’s Josh Lee, the answer is a no-brainer.
“I’m already way back on the starting grid. It can’t be any worse than that. The only way is up, isn’t it? said the cherubic 10-year-old.

It was this spirit of optimism that reaped rich rewards for the young driver, who was racing in Round 5 of the 2012 Rotax Asia Max Challenge last Sunday at the semi-street Inderapura track at Pekan, Pahang.

Josh, the only Singaporean racing in the 2012 Rotax Asia Max Cadet Category featuring 14 drivers from five countries, earned an impressive 5th position and took his place among the winners on the podium. 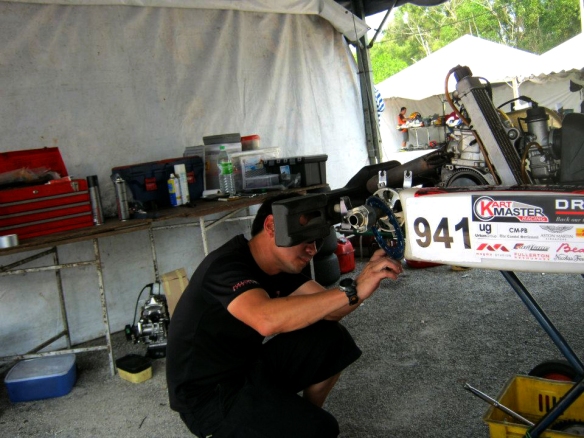 Josh’s father, James Lee hard at work setting the kart right for Josh. His constant dedication has paid off.

But, behind the glory and celebration was a story of unyielding determination borne out of pure exasperation. After impressing during practice and qualifying, a frustrating pre-final saw a rival collided with Josh from the side while attempting an overzealous overtaking move. Shaken, the Singaporean re-started his kart and continued racing. He finished 11th out of 14 drivers in the pre-final.

Josh putting the stickers in place which were peeling off due to the high speed on the track.

“I was disappointed, of course,” said Josh, who had finished 8th in the previous round at Sepang. “I did not cause the collision. It wasn’t my fault but I paid for his mistake.”

At that point, Josh could have been forgiven for giving up and settling for nothing. But he refused to go home empty-handed.

His one-man mission started in 11th position at the Finals. Like a phoenix rising from the ashes, Josh pounded his Micromax engine and his Tony kart roared into life. One by one, he slithered past his rivals and, by Lap 6, he had already skinned five drivers to move up to 6th place.

There, his old nemesis – the guy who crashed with him during the pre-final – was in his way once again. Revenge? Oh yeah. This time, Josh timed his assault to perfection, tailed his opponent for three laps and made the decisive move at the back straight.

Finally, Josh was 5th and never looked back.

“After a disappointing pre-final, I am delighted to earn a podium finish,” said Josh, who clocked a Final time of 12:03.411, behind race winner Presley Martono of Indonesia.

“I think I put on a good show despite all the odds stacked against me. I’m proud of myself that I never gave up.”

It was a no-brainer. Josh never would.

More photos of the race can be found here.